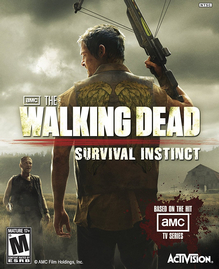 The Walking Dead: Survival Instinct was removed from Steam on March 10th, 2016 and from Xbox 360 Games on Demand no later than March 21st. The $50 game was deeply discounted at $9.99 leading up to its delisting. The PlayStation 3 versions was likely delisted around the same time. Activision’s expired license to The Walking Dead and the game’s general poor reception are likely the cause for the delisting.

The Walking Dead: Survival Instinct remains available on physical media for Nintendo Wii U, PlayStation 3, Xbox 360, and PC. As of December 2017, Amazon still has Steam download codes available to buy.

The Walking Dead: Survival Instinct is a first-person action survival game that brings to life the authentic, heart-stopping horrors of the AMC hit TV series The Walking Dead. In the game, players assume the role of the mysterious, crossbow-wielding survivor Daryl Dixon, brought to life by TV series star Norman Reedus, alongside his overbearing brother Merle, voiced by Michael Rooker. Join them on a haunting, unforgiving quest across the Georgia countryside.