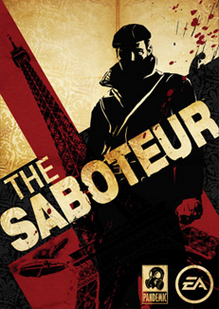 The Saboteur was delisted on Steam between July and October of 2015. On July 24th, 2015  the game’s title and URL on Steam were changed to reference an Electronic Arts EULA. On October 7th, 2015 the game’s Steam Community Hub was disabled.

Shortly after the game’s release, EA shut down developer Pandemic Studios. However, The Saboteur has remained available on both GOG.com and Origin since release, ruling out a relationship between the game’s removal and its defunct developer. It is possible that the Steam version suffered from irreparable performance issues — or simply low user ratings — and EA chose to wipe it from the platform.

Peculiarly, the game’s PlayStation.com page features a “Buy Download” button but based on release data, the game was never available to download on either PlayStation 3 or Xbox 360. Throughout 2014 the game’s Day One DLC, The Midnight Show, was removed from PlayStation and Xbox storefronts but as of this writing it has returned to the PlayStation Network.

“Welcome to Nazi-occupied Paris, a unique open world where you are The Saboteur. Play as Sean Devlin, a street-tough Irish racing mechanic seeking personal redemption on a Nazi officer that has taken everything away from him. Now, it’s time for payback—with the help of the French Resistance, British intelligence, an arsenal of weaponry, your own street smarts and brawn, you must exact revenge on those who aimed to destroy your life. Motivated by retribution and armed with tactics of sabotage, blow up zeppelins, derail trains, implode bridges, destroy armored tanks, and level enemy facilities in the name of vengeance. This truly is the first open-world action game set in Nazi-occupied Europe.“

Thanks to  Aawesom for submitting this game to the site.