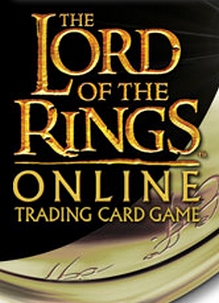 On May 22nd, 2007 the team behind The Lord of the Rings Online: Trading Card Game announced their plans to shut down the title three years later in June of 2010. The post read:

Decipher, Sony Online Entertainment (SOE-Denver, formerly the guys from Worlds Apart Productions), and New Line Cinema announce today that The LOTR Online TCG will continue to operate and serve players through June 30, 2010. The sale of all digital cards for the game will stop on June 30, 2007. The companies join together in thanking the player base for their active support and enthusiastic participation in the game during its very successful run.

Beginning early June and continuing through June 30, 2007, Decipher and SOE-Denver will offer players the opportunity to purchase a special, one-time only commemorative package that contains one of each card in the following sets of LOTR TCG: The Wraith Collection, Rise of Saruman, Treachery and Deceit, and Ages End. The price of this package will be $25 for a total of 333 cards. As an added gesture of appreciation, Fellowship Members who maintained their active membership during the past six months and who subsequently purchase the special commemorative package will also receive a full parallel foil set as well (one foil copy of each card in the commemorative package).

In June, Decipher and SOE-Denver will hold a final tournament, free to all current players, to celebrate the impressive run of The Lord of the Rings Online TCG. The top five finishers in that tournament will each receive a digital playset (four copies of each card) of every The Lord of the Rings Online TCG card ever sold. Check the site and message boards for more details in the coming weeks.

“The online game’s rules matched the physical games rules, but utilized tradeable virtual cards that could be purchased through the system via starter decks, booster packs, or in draft. In addition to casual play, the online LOTR TCG system supported tournament play, league play, and sealed play including draft.

The online system introduced a number of cards and formats that were online-only (for example, King-block draft packs), and offered players exclusive physical promotional cards and online avatars and movement tokens for participating in online events. The LOTR Online TCG software included collection management and robust deckbuilding features. For this reason alone many players have used the software to construct decks and print decklists.“ – Wikipedia