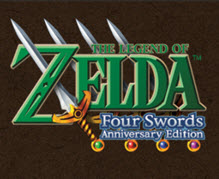 On January 30th, 2014 The Legend of Zelda: Four Swords Anniversary Edition was once again made available as a free download in North America for four days “to celebrate the critical acclaim for The Legend of Zelda: A Link Between Worlds” according to Nintendo’s Facebook post.

“The Legend of Zelda: Four Swords Anniversary Edition is a special commemorative version of the 2003 Game Boy Advance release, The Legend of Zelda: A Link to the Past & Four Swords. In it, you’ll embark on an exciting multiplayer adventure filled with action and puzzles as you work to save Princess Zelda from the evil Vaati.

You can play with up to four friends at once, as long as each player has a copy of the installed on their Nintendo 3DS, Nintendo DSi, or Nintendo DSi XL system.“

The Legend of Zelda: Skyward Sword represents one of the deepest and richest experiences ever produced by Nintendo. More than 100 staff members have been working for five years to produce the epic story, which includes a new approach to game play and more than 100 minutes of cinematic cut scenes. The game also will feature a boss challenge mode and, for players who need assistance, optional hint movies to help them along. Make sure you experience this epic adventure when it launches on 18th November across Europe for Wii.

To get you in the mood for The Legend of Zelda: Skyward Sword, Nintendo is giving you a unique opportunity to re-live or experience for the very first time on your Nintendo DSi™, Nintendo DSi™XL or your Nintendo 3DS™ system a classic multiplayer Zelda adventure. Download and experience the original classic Game Boy Advance™ game, but this time with additional new areas to play and a single player option to enjoy, which were not in the original game as The Legend of Zelda™: Four Swords Anniversary Edition becomes available to download for free and for a limited time* only on 28th September, on Nintendo DSiWare™.

Fans of the original game or newcomers alike can expect classic 2D multiplayer adventure as two to four players wirelessly connect their Nintendo DSi, Nintendo DSi XL or Nintendo 3DS systems as they work together to rescue Princess Zelda after Link splits into four with the help of the Four Sword. You and up to three of your friends will each don a different coloured tunic as you all take on the role of Link. Ensure you work together as you discover and play across four themed areas, solve numerous puzzles and defeat bosses along the way. Make sure you collect more Rupees than your friends if you want to be the overall winner after completing one of the themed areas.

However, unlike the original Game Boy Advance version, it is now possible to play the game in a brand new way as a single player. When you go solo you won’t be totally alone though as an additional Link will appear beside the one you control to help you along during your adventure. It is even possible to independently control “each” Link by selecting either of them using the L or R Buttons.

What’s more, there are 2 exclusive new areas to play each containing 3 new levels to complete which have been specifically made for this edition of the game. By completing the new areas, each Link will be able to unlock additional special skills. Fans of the franchise will be familiar with the Hurricane Spin and Master Sword and both return to help you on your quest.

Mastering the challenging new area ‘Hero’s Trial’ which contains elements from other levels as well as 3 new maps will allow you to unlock the Hurricane Spin, whilst tackling the new area. ‘Realm of Memories’ made up of famous locations from selected titles in The Legend of Zelda series, unlocks the Master Sword.

The Legend of Zelda: Four Swords Anniversary Edition also includes new control options including “whistle” functionality on the X Button, allowing players to call for attention, alert each other of their location on the map, as well as making use of the lower screen to show your inventory and place on the map.

In November, select retailers across Europe will also carry a limited-edition Prepaid Card to highlight the series’ 25th anniversary. The card, which is used in the Nintendo eShop of the Nintendo 3DS system or which can be used in the Wii Shop Channel or Nintendo DSi Shop , features Link™ battling Ganon. Keep an eye out as an additional two limited-edition Prepaid cards featuring different designs will be made available at a later date.“