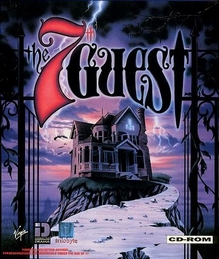 The 7th Guest was removed from sale on GOG.com on March 1st and on Steam on March 26th, 2019. The day before the delisting elcook from GOG’s PR team announced the upcoming removal on the game’s forum:

“We’d like to inform you that on Friday, March 1st we will be removing The 7th Guest from our offer due to publisher request. Everyone who already purchased it or will purchase prior to delisting will keep the game in their GOG library.  We do hope to bring the game back to GOG.COM.”

The delisting is likely related to the release of The 7th Guest: 25th Anniversary Edition on April 2nd, 2019.

Henry Stauf’s mansion has been abandoned for as long as anyone dare remember. Stauf was a master toy maker, a maker of amazing puzzles and this strange house was his greatest creation. Now the mansion stands empty, rotting ever since the children started dying, ever since the six guests came. Now there are only the eerie lights and the terrible sing-song rhymes of the children.

And suddenly, you are in the house. You move from room to room, step-by-terrifying-step, as scenes from that night of horror come to life. Because Stauf’s game isn’t over. There were six guests the world knew about – and there was one other. Stauf’s mad mansion lives again. And only you can end the nightmare and learn the secret of The 7th Guest.