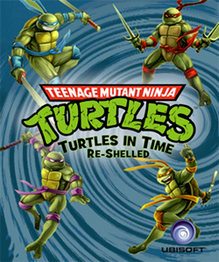 In January of 2006 Ubisoft secured the video game rights to the CG feature film reboot of the Teenage Mutant Ninja Turtles. This enabled them to form a co-publishing/licensing deal with Konami to port the original arcade game to consoles as well as create a polygonal update to the arcade sequel, Turtles in Time. Teenage Mutant Ninja Turtles: Turtles in Time Re-Shelled launched exclusively on the Xbox 360 as part of the 2009 Summer of Arcade promotion, and later came to the PlayStation 3 less than a month later.

Word spread late in June of 2011 that Ubisoft’s TMNT licensing deal had expired and that Re-Shelled would be taken offline on June 30th. Konami’s own copyrights on the original arcade game and Turtles in Time expired on October 16th, 2011 and September 1st, 2013 respectively. It seems neither Ubisoft, Konami nor another party sought to renew the licenses through 2013. Archive.org captures confirm that Ubisoft’s port of the original TMNT arcade game was also removed from Xbox Live between June 13th and July 14th of 2011.

Perhaps due to an oversight or differences in territorial licensing, Re-Shelled remained available on the PlayStation Store in Hong Kong, India, and Korea through early 2018. Delisted visitor BlackwinGzReborn let us know the links were no longer active on March 27th, 2018.

“The Turtles are back! Relive, or discover for the first time, the flashy visual style and humor of one of the most acclaimed arcade games of all time. Starring Leonardo, Donatello, Raphael and Michelangelo – everyone’s favorite pizza-loving, wise-cracking, reptilian crime fighters. The game has been recreated in beautiful full 3D HD graphics and enhanced animations but still has all of the favorite moments and gameplay from the original.

Use pizza power-ups and huge body slams to make your way through history in an attempt to restore peace to the Big Apple.”

Shortly before the game’s release the price was officially reduced to $10 with a Ubisoft spokesperson explaining that “we wanted to give something to the loyal TMNT fans in honor of the 25th anniversary.”. This was followed by underwhelming reception and scores with many claiming it to be the worst title in an otherwise stellar Summer of Arcade lineup on Xbox 360.