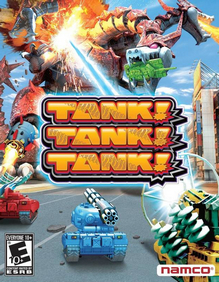 Tank! Tank! Tank! was confirmed to be relisted on the Nintendo eShop no later than April 2021, according to a comment from site reader HandMaskTar. The game may have been relisted beforehand but no earlier confirmation could be found.

Tank! Tank! Tank! was delisted from the eShop for Nintendo Wii U no later than August 30th, 2018. On this date, user falcomaster529 posted a comprehensive list of all delisted Wii U eShop titles to the r/wiiu subreddit. Tank! Tank! Tank! was likely delisted prior to this but this is the earliest confirmation of it being removed that we could find.

According to Htbaa who submitted the game to the site it is not possible to buy the DLC even if you had previously downloaded the free-to-play title. The game remains available only on physical media.

This downloadable version based on the Wii U ™ game released on November 30th, 2012 will give access to a free Basic Pack (with 3 different modes: Monster Battle mode; Free-For-All mode and Team Versus mode, all in Urban Area stage) available three times a day. In addition to the basic pack, other contents can be purchased separately. The three times a day limit on the free Basic Pack will be unlocked and will become playable after any one of the other contents are purchased. Purchasing all additional content will allow the user to have a version as complete as the retail version in terms of content. As a special launch promotion, My Kong Mode, where players can take control of a huge boss and fight against other players, will have an 80% discount until February 28th 2013. – Bandai Namco press release

Thanks to Htbaa for submitting this game to the site