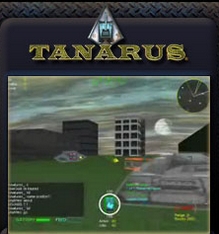 Tanarus was shut down on June 10th, 2010. The announcement was posted to the IGBL forums on May 10th and read:

For many, Tanarus was their first online gaming experience and we hope that the thrills the game provided propelled those players on to more online gaming fun in Tanarus and other Sony Online Entertainment games.

We greatly appreciate all of the Tanarus players who have shared their online tank battles with us over the years and we hope to see you online in our other thrilling games available on Station.com.”

Tanarus, along with Cosmic Rift and Infantry Online were included in the original Station Pass subscription fee for Station.com but transitioned to a free-to-play model with the site’s redesign in July of 2007. Dwindling player base and a need to move developers to other projects are the most likely cause of Tanarus’ delisting. Cosmic Rift, Infantry Online and other SOE titles were not shut down until the end of March 2012.

“Thunder across post-apocalyptic cities and industrial wastelands at the helm of your very own tank and blast any enemy that dare get in your way. Complete Access Tank combat 5 tanks to choose from 30 weapons to choose from Team play.“