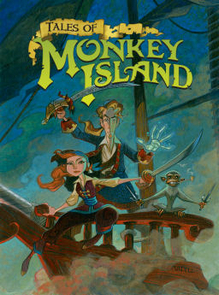 Tales of Monkey Island returned to sale on Steam and GOG.com on June 25th, 2020. Like other Telltale Games titles that have returned to sale, Monkey Island is now published by Athlon Games with the developer listed as LCG Entertainment. On Steam, the game is only available as a package which includes all five episodes that were originally sold separately. The game is not expected to return to sale on PlayStation 3. Our original delisting details follow.

Tales of Monkey Island was delisted from Steam on November 14th, 2018 when its price was set to $0.00 making it unavailable to purchase. It remained available on PlayStation 3 for a time, possibly being delisted by the end of 2018.  On Wii, if it had not been removed in late November it became unattainable when the Nintendo Wii Shop Channel was shut down on January 30th, 2019.

The game was removed amid the financial troubles and rapid closure of Telltale Games in the Fall of 2018. Download codes and physical copies of the PC version remain available as of this writing but compatibility with newer hardware makes this title very nearly Extinct.

“Sabers, skullduggery, romance! Tales of Monkey Island™ has it all! While explosively stripping the evil pirate LeChuck of his demonic mojo, Guybrush Threepwood inadvertently infects the entire Caribbean with the arch-fiend’s expelled voodoo. Pursued by a notorious cut-throat pirate hunter and a creepy Frenchman who believes that Guybrush’s eerily-infected hand holds the secret of eternal life, Threepwood sails the seven seas in search of La Esponja Grande, a legendary sea sponge with unparalleled voodoo exfoliating abilities. Little does Guybrush know, his quest is part of a larger, more sinister plot, and good and evil are not always as they seem…

Who can Guybrush trust? Where can he turn? Everything you think you know will be challenged in this epic 5 game pirate saga in the all-time great Monkey Island gaming series.“