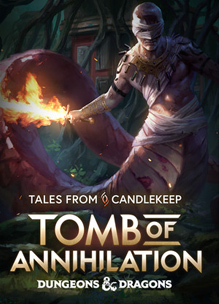 BKOM Studios announced on May 2nd, 2022 that Tales from Candlekeep : Tomb of Annihilation would be removed from sale on Steam on May 20th. The game and its DLC were put on sale through May 9th. Although unconfirmed, the delisting is likely related to expired licensing of the Dungeons & Dragons property from Wizards of the Coast. The team’s brief announcement follows:

We are sorry to announce that Tales from Candlekeep : Tomb of Annihilation will become unavailable for purchase on May 20th 2022.

While it will no longer be possible to acquire the game or any of the additional content on that date, players who have the game in their Steam library will still be able to play it and enjoy all of its content.

Grab all the content before it leaves the store. The base game is now 85% off while all the additional content is 60% until the end of the week.

Until we meet again adventurers,

– The team at BKOM Studios=

Tales from Candlekeep: Tomb of Annihilation is a turn-based dungeon-crawling game based on the Dungeons & Dragons Adventure System board games.

The Adventure System is a cooperative board game series that takes place within the world of Dungeons & Dragons. Your party of heroes work together as a team as you explore, fight monsters, and uncover magic treasure. The game itself runs the traps, events, monsters, and villains.

On the deadly peninsula of Chult, an adventuring party must fight their way through dangerous jungles, labyrinths and dungeons to find and reverse the cause of the death curse. Choose to play as one or more of the four adventurers (Artus Cimber, Asharra, Birdsong, and Dragonbait) to face many perilous challenges and deadly foes throughout the quest.