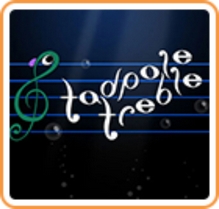 An approximate timeframe for the delisting of Tadpole Treble from the Nintendo Wii U eShop has yet to be established. The game was submitted to the site in April 2019 but no archived links have been found to substantiate when it was last available to buy. At the time of this writing the game’s Nintendo.com page still showed a price with no option to buy. A follower on Twitter was able to confirm that the game is not available to buy directly from a Wii U.

It is likely that the delisting relates to Nintendo’s developer licensing. According to sources, Nintendo is no longer renewing Wii U licenses and once these expire all titles from the developer are eligible to be removed.

“In Tadpole Treble, swim through the actual sheet music of the game’s songs. Avoid the notes, hit the beats, and guide a young tadpole through varied stages in a melodic quest to get home! The adventure introduces a unique, appealing song for every stage, showdowns against intimidating boss creatures, rhythmic elements to master, and rewards for seasoned players. Unlock stages, a music player, a bestiary, developer commentaries and an endurance test.

Creative players of all ages will love our Composition Mode, where you can create your own songs using dozens of different tools….and then play through your masterpiece with Baton, or share them via QR codes! Webcomic artist Matthew Taranto, game designer Michael Taranto, and the whole team at BitFinity are happy to present Tadpole Treble–an aquatic, melodic adventure for all ages. Dive on in and enjoy this musical odyssey!“