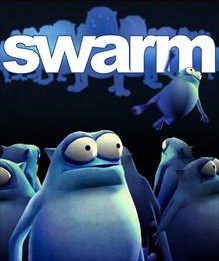 Swarm was delisted worldwide from Xbox 360 and PlayStation 3 no later than October 9th, 2018. This is the date we received a submission pointing out the absence of Mercury Hg and found that Swarm, also published by Ignition Games, had been delisted. Unlike the Mercury titles published by Ignition Games which were delisted in Europe only, Swarm has been delisted worldwide and is considered extinct.

As of this writing no explanation for the delisting has been given by Ignition Games or developer Hothead Games.

“50 of a kind beats everything! Swarm is an action-platformer where you take direct control of 50 pudgy blue morons and drive them through an intense and suicidal gauntlet of destruction. Run, bash, huddle, boost, stack, jump, push and throw your way through a ridiculously dangerous world in your attempt to collect valuable DNA and ensure at least one swarmite survives. Swarm is the first game to feature mass character control, where you move all 50 swarmites at once.

Steer your swarm through the game and they naturally flock and flow around obstacles. Creatively combine swarm moves to work your way through a hilariously brutal environment. Swarm features fast-paced platformer action and includes death medals, boss fights and a scoring system that encourages heated competition with your friends. ”