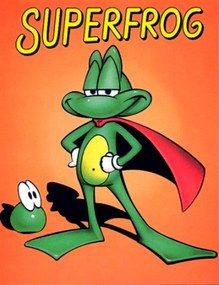 Looking at the WIPO IP database, Team 17 applied for a trademark on Superfrog in May of 2013, over a year after launching the original game on GOG.com and in the same month that they released Superfrog HD.

WIPO shows several trademark holders that have used the name Superfrog along with a logo depicting a frog wearing a cape over the decades. As of July 2017, Oceaneering AGV Systems holds the oldest trademark on the name (1990) with the longest time to expire (2027). It’s possible Oceaneering plied their trademark against Team 17 who ultimately withdrew their own trademark application in September of 2016, shortly after the games were delisted.

“An evil old witch has turned the Prince of Magic Kingdom into a bright green frog and kidnapped the love of his life. All hope seems lost for the once regal amphibian. But suddenly, out of nowhere, a strange bottle floats down the stream and catches his attention. Intrigued, our soon-to-be-hero takes a huge swig and after a few minor explosions he becomes the legend that is soon to be known as Superfrog! With boundless courage and new heights of determination, he sets off towards the Magic Forest with three objectives in mind. One, to get back his girl, two, to vanquish the curse, and three, give that nasty old witch just what she deserves!

Superfrog is a classic 2D platform game with colorful and cheerful graphics and fast-paced action. It’s fun, easy to get into, and intuitive. Masterfully designed levels ensure a very smooth and enjoyable experience. It’s the perfect title to just sit back, relax, and have a good time.”