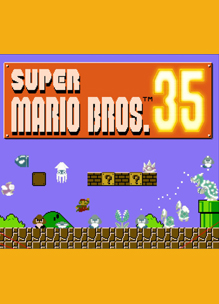 Super Mario Bros. 35 was delisted on Nintendo Switch on March 31st, 2021. That deadline date was confirmed alongside the announcement of the game on September 3rd, 2020 as part of the 35th Anniversary of the original Super Mario Bros. According to Nintendo’s Doug Bowser the limited-time availability was intended as a “unique and different way” to celebrate the anniversary period. As an online-only and digital exclusive, Super Mario Bros. 35 is now considered Extinct.

You’ve never played a Super Mario Bros. game like this before. Race against time, defeat enemies, and sabotage your opponents in an online* battle to be the last Mario standing! Each player is given the same timed stage, but you must defeat enemies to earn extra time and attack your opponents. Don’t forget to pick up some coins on your way—they can be used to get in-game items like power-ups. Check-in daily to complete objectives and earn in-game coins. Special Battles: a limited-time event where you can play a set order of courses. It’s similar to a regular 35-Player Battle but with added special conditions, such as starting with 100 coins.

Participation in online matches may result in your nickname and game stats being shared within the game or in promotional activity. This game is playable until March 31, 2021.