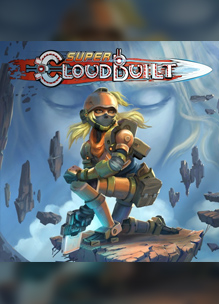 There might be some good news, and bad news here at the same time. As some of you’ve probably already seen, there will be some changes around Super Cloud built. Coilworks’ publishing agreement with Double Eleven has come to an end, and due to some technicalities, that means there are some changes coming to SCB on PC.

The console version of Super Cloudbuilt will sadly not be updated and even more regrettably, the sales of the console versions will sadly come to a close very shortly. Owners of the current game will still be able to access the game on consoles and download it again freely, but no one will be able to buy new copies of the game. (We wanted to give everyone a longer heads up here, but this is sadly how it turned out)

On PC, things will be a bit different. The PC version will still be around, but it will be temporarily taken down from sales, and that is already in effect. We aim to get the game back on sale as soon as we can, but we will need to update the game a bit first.

First of all, we want to be clear that we hope this to be an as smooth process as possible for everyone, and we will do absolutely everything we can to ensure that. Before we clear up questions, let’s just set the stage for the scope of what we are working on.

We are internally calling this update “Super Cloudbuilt Remastered”. Some of the changes needed were best resolved by moving SCB to our latest engine branch, which led to most of these things. It might sound big, and in some ways it is, as We don’t want to promise anything for sure yet, but we are working on the following key updates: there will be a few important updates to the game.

Although the team couldn’t reveal specifics, the delisting comes at the end of their publishing arrangement with Double Eleven. Unfortunately, there isn’t enough manpower to work on the “remastered” release and update the console versions so as of this time there are no plans to bring the game back to PlayStation 4 or Xbox One.

Take on the role of Demi, a young soldier who wakes up in the empty shell of a ruined building, in the center of a strange new world, disconnected from her old life and physical body. With each new challenge she overcomes Demi slowly pieces together the future now laid out before her.

This remastered edition stays true to the original concept with an emphasis on player skill and creativity, but with even more diverse mechanics and a more connected and varied world.

Will Demi learn to understand and accept her new world, or question her reality and learn to defy it?