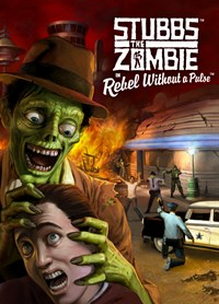 Stubbs The Zombie in: Rebel Without A Pulse was delisted from Xbox 360 in late 2012 and from Steam on November 26, 2014.The game had previously been delisted on Steam sometime between 2010 and 2012 and returned briefly in 2013. Both versions were reportedly delisted due to “technical issues” and incompatibility with newer hardware, although licensing of some kind may have also been a cause.  Aspyr Media then announced in February of 2021 that they would soon be releasing an updated port of Stubbs the Zombie on PlayStation 4, Xbox One, and Nintendo Switch, and relisting the title on Steam on March 16th, 2021.

Meet Edward “Stubbs” Stubblefield in Stubbs the Zombie™ in Rebel without a Pulse™. During the Great Depression, he was a down-on-his-luck traveling salesman. Now it’s 1959 and he’s a zombie with an insatiable hunger for human brains. How could this happen?

The answer lies buried somewhere in Punchbowl, Pennsylvania, a high-tech “City of the Future” built by the world’s richest man. Punchbowl is a paradise of hovercars and helper robots, where crime and pollution simply don’t exist. It’s the perfect city: safe, clean, and convenient. Stubbs can’t wait to move in … and have the last laugh on humanity. Indulge your appetite for vengeance … and brains.

Thanks to [RDR.EXE] reader for submitting this game to the site