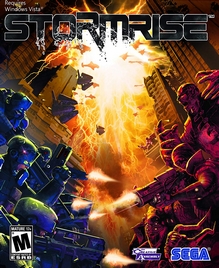 Stormrise was delisted from Steam on April 14th, 2014. Shortly after release in 2009 The Creative Assembly announced that work on the second patch for the game had been cancelled and that Creative Director, Ken Turner, had left the company. Given the game’s poor reception and abandoned support, it is no surprise that Sega chose to remove it from sale five years later rather than update the title to remove the Games For Windows LIVE multiplayer infrastructure.

Universe at War: Earth Assault and The Club, both utilizing Games For Windows LIVE and both published by Sega, were also delisted on this same date. The Club was updated months later and returned to sale based on its popularity, indicating that Sega was not afraid to delist a game for poor sales or performance issues.

“Assume command on the frontlines of battle! Experience the rush of battle in ways no other real-time strategy game has ever offered. Stormrise is the first truly 3D, next-gen RTS that, via the 3rd person camera perspective, puts you directly in the action. No other RTS game combines this level of immersion and emotional intensity with the scale and depth of a strategy game. Stormrise puts you on the frontlines of battle as the heroic leader of your troops, allowing you to lead from the front in the world’s most immersive RTS.

Earth’s protective atmosphere has been stripped away by a catastrophic event centuries ago. In a bleak and barren landscape, the planet’s inhabitants have had to adapt radically in order to survive, resulting in the creation of two distinctly different races; the Echelon and the Sai. With both factions constantly battling for supremacy, the rebuilt civilization is on the brink of another catastrophe…“