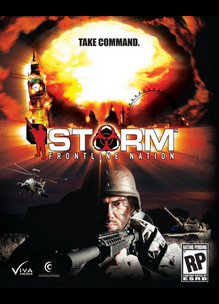 STORM: Frontline Nation was removed from Steam around November of 2014. The delisting is likely related to the closure of both the developer and publisher, resulting in no party to maintain its presence on Steam or any other platform. As of this writing, download codes remained available through Green Man Gaming.

Arm yourself for the greatest conflict of modern times! STORM – Frontline Nation revolutionizes the turn-based strategy genre with unbelievable strategic depth and a cinematic scenario. Scarce resources and a prolonged economic crisis plunges half the world into strife, which can only be resolved by a force of arms. The tension laden mood has a host of nations mobilizing troops and researching advanced warfare technologies. New groups are created, accords are signed and alliances turn to face war. The player has myriad of possibilities available to them.

in terms of resource and troop management. Enormous freedom of action in the areas of combat, research and diplomacy allows the player to secure world domination for one of the nations. The perfect mix of strategy and turn based combat makes STORM – Frontline Nation unique in its genre.

Thanks to Grester for submitting this game to the site