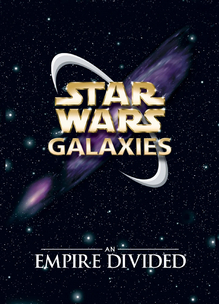 We write to you today to inform you that on December 15, 2011, Sony Online Entertainment (SOE) and LucasArts will end all services (MMO and Trading Card Game) for Star Wars Galaxies (SWG). The shutdown of SWG is a very difficult decision, but SOE and LucasArts have mutually agreed that the end of 2011 is the appropriate time to end the game.

We are extremely grateful to all of the SWG fans. We have had the rare opportunity to host one of the most dedicated and passionate online gaming communities and we truly appreciate the support we’ve received from each and every one of you over the course of the past eight years.

In recognition of your incredible loyalty, we are extending special Fan Appreciation offers to the current SWG community. We also plan to go out with a bang with a galaxy-ending in-game event in December and hope to see you all there. The details relating to these offers and events as well as the timeline and specifics regarding the discontinuation of the service, are provided below.

Again, we want to extend our heartfelt thanks to our player community for making SWG one of the best online communities in gaming history.

In late December of 2011, Technical Director and Producer of Star Wars Galaxies, Tony Tyson, made a final post to the game’s homepage. His farewell message was accompanied by a gift to the community, a 252-page PDF recounting the game’s development and content from initial announcement in 2000 to the final days in 2011. The page has since been removed but we have uploaded a copy of the ‘Star Wars Galaxies Memory Book’ to Archive.org.

Since being shut down, several teams of fans have sought to recreate or otherwise bring the game back online with private servers. You can read more about some of these endeavors on the game’s Wikipedia page.

“Be the hero of your own Star Wars™ adventures in a galaxy far, far away. Star Wars Galaxies: The Complete Online Adventures is the most complete Star Wars Galaxies experience ever, and now includes An Empire Divided™, Jump to Lightspeed™, Rage of the Wookiees™, and Trials of Obi-Wan™, plus the all new Star Wars Galaxies™ Trading Card Game: Champions of the Force!“

The Galactic Civil War continues on a whole new playing field with the introduction of the Star Wars Galaxies™ Trading Card Game and its first release, Champions of the Force, the first ever online Star Wars trading card game.