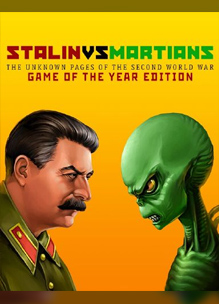 Stalin vs. Martians was delisted on PC platforms (Steam, Direct2Drive, GamersGate, Impulse) no later than July 22nd, 2009. By that date the game’s homepage was updated to read that “the game is currently not available for purchase at the digital distributors. Watch for the updates, the upgraded SvM is on the way!”. However, the upgraded release never materialized.

The game received a patch and price cut in June of 2009 but performance issues, along with its poor reception, may have persisted to the point that the game was removed from sale. Paradox Interactive may also have sought to distance themselves from the bad publicity as Stalin was sub-label Mezmer Games’ debut release.

One of the co-developers of the game, Dreamlore, was absorbed by KREMLINCORP Entertainment around its founding in 2010, apparently also obtaining the Stalin vs Martians property. Publisher Mezmer Games appears to have stopped operating in 2010 as well with their only other announced title, Legio, ultimately being released under Paradox Interactive’s label.

Stalin vs. Martians, as the name suggests, is a game both masterfully trashy and absolutely over-the-top. Fun and accessible, it takes a simple arcade-like approach to the genre of real-time strategy. The player controls the Red Army, as it defends Earth from the Martian Invasion of 1942, that highly classified military operation which even today remains a closely guarded state secret. Stalin himself conducts the mission briefings, and later even becomes a playable unit. The bold leader is duly serious, even as he faces the most ridiculous threat the world has ever known.

The game itself is far from standard RTS fare: this is no realistic and deeply strategic war simulation, but a straightforward, fun and light-hearted arcade-style game – complete with power-ups falling from conquered foes in the form of bright shiny coins.