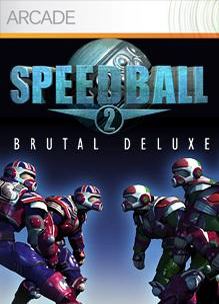 Speedball 2: Brutal Deluxe was delisted around the closure of Empire Interactive on May 1st, 2009. With no entity available to maintain the game, it was removed from sale. The delisting likely occurred no later than June 7th, 2009 around the same time that Empire’s release of Double Dragon was delisted.

Speedball 2: Brutal Deluxe. The superb future-sport game from the legendary Bitmap Brothers is now available on Xbox LIVE Arcade. Play this fast-paced and utterly brutal game with its classic 2D graphics fully intact, or go full on with the new super-enhanced High Definition 3D visuals. Speedball 2: Brutal Deluxe offers you the sporting world of the future! Smash your way to the top of the league in the solo game or go head to head locally or LIVE. Includes 32 teams, 4 leagues, cup and knockout competitions, team enhancements, personalised team strips, management and training options, and LIVE Ranked Preset or Ranked Career games.