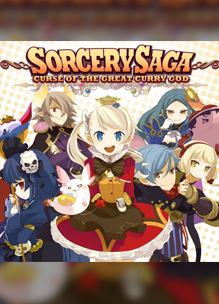 Sorcery Saga: Curse of the Great Curry God was delisted from the PlayStation Vita in Australian and European regions in the first half of 2020. We received word on Twitter that the game had been delisted as early as February but it wasn’t confirmed until another user pointed out that it was gone in July.

As the game was published in these territories by Rising Star Games, it is assumed that the publishing deal between them and developer Zerodiv expired in 2020. As of this writing it is unclear if the game may return in these regions.

“Sorcery Saga: Curse of the Great Curry God is a curry-licious dungeon crawler RPG for the PlayStation®Vita system! Play as Pupuru, a young, ambitious girl on a quest to obtain ingredients for the legendary curry to save her friend’s restaurant. With the help of the moody creature Kuu and the noncommittal Puni, she’ll have to defeat the host of weird, sometimes appetizing creatures that stand in her way! But beware, once you enter a dungeon, Pupuru will need all her skills to fight fore if she falls, her levels and items obtained will disappear! Get ready for a truly delectable storyline with a side of awesome, challenging gameplay!“

Thanks to @2_Old_4_Gaming for submitting this game to the site