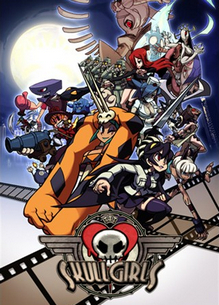 The original versions of Skullgirls were delisted on Xbox 360 and PlayStation 3 by December 31st, 2013. Konami requested that Skullgirls be delisted by the end of that year after Autumn Games parted ways with the co-publisher who handled these initial releases. Autumn Games announced later in December of 2013 that Skullgirls would return with a new title and publishing partners in 2014.

The Xbox 360 version was updated to Skullgirls: Encore and returned to sale in April of 2014. The PlayStation 3 version, on the other hand, was replaced with an entirely separate release starting in February of 2014. The Steam version was not delisted but was later updated to include the Encore content.  Although the original game no longer exists on either console, the major difference is that save data, leaderboards, and Trophy unlocks did not carry over between versions on PlayStation 3 (AU, EU, JP, NA).

Konami Digital Entertainment GmbH has announced a new entry into the 2D fighting genre, as it again pairs up with Autumn Games to distribute Skullgirls on PlayStation®3 and Xbox 360®. Developed by newcomer Reverge Labs, Skullgirls is a fast-paced 2D fighting game set to release later this year on PlayStation®Network and Xbox®LIVE Arcade.

Starring a cast of feisty female warriors, Skullgirls is a multi-layered fighter featuring all-new game systems for veteran fighting game fans while also making the intimidating genre enjoyable and accessible to the casual gamer. Set in the Canopy Kingdom, Skullgirls tells the tale of eight female warriors as they fight to reclaim a wish-granting artifact known as the “Skull Heart” from the monstrous Skullgirl. As legend has it, every seven years this enigmatic Skull Heart grants a wish to a young woman… but this power can come at a terrible price. If her heart is impure, her wish will be twisted and she herself will be transformed into a Skullgirl.