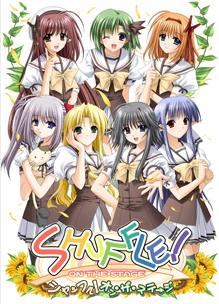 Shuffle! was first delisted from MangaGamer.org on March 31st, 2016 alongside Soul Link and then brought to Steam  later that year by publisher YumeHaven. It was then announced on January 29th, 2021 that Shuffle! would be delisted on Steam just a few days later on January 31st. The announcement follows:

In accordance with the termination of our publishing agreement, Shuffle! will no longer be available for purchase on the Steam store as of January 31st 7:00am PST. For those of you who have already purchased the game, you will continue to be able to download and play as before. However, after 7:00 January 31st you will no longer be able to purchase and download the game. We apologize to all the fans of the title and ask for your understanding on this matter.

According to Steam Community forum posts, YumeHaven’s arrangement with developer Navel to manage the game on Steam ended earlier in January of 2021 resulting in the delisting.

“Shuffle!” was originally released by Navel in 2004, at the same time when “Fate/Stay Night” and “CLANNAD” were gaining popularity. With the “Shuffle!” TV animation and a console release which followed the initial release, it has managed to sell over 200,000 copies making it an incredible popular visual novel.

Now, YumeHaven is releasing the console version of “Shuffle!” in English on Steam. In addition to the 5 girls’ routes which were originally available in the console version, 2 more playable routes have been added, “Kareha” and “Mayumi Thyme”.

Thanks to Valethor for submitting this game to the site