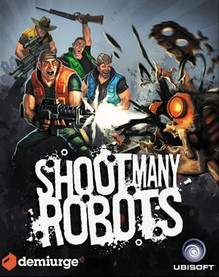 Shoot Many Robots was delisted from Steam on July 14th, 2017. According to Archive.org captures it was delisted on Xbox 360 between January 29th and August 30th, 2017. Both the Xbox 360 and PlayStation 3 versions of the game were presumably delisted around the same time as the Steam version.

No explanation was given by Demiurge Studios or Ubisoft. Based on low daily player counts for the Steam version the game may have been delisted to consolidate server or staff resources; between November 2016 and 2017 only a few spikes put the active player count over twenty. After the delisting one Steam community commenter allegedly heard from the developers who said “they were looking at getting it back on Steam. No timeline though”.

Shortly after release, Demiurge announced a beta test on Steam for a player-vs-player off-shoot of the main game titled Shoot Many Robots: Arena Kings. It never officially left beta and was abandoned without comment sometime around May of 2014. The Steam community page is still accessible here. Demiurge also converted the game’s assets to create an endless runner for Android titled Shoot Many Robots, though the gameplay is vastly different from the original game.

“Shoot Many Robots is a 4-player co-op run-n’-gun action game starring robot slayer and gun aficionado, P. Walter Tugnut. From a gun that shoots garden gnome missiles to a tutu that boosts speed and damage, there are hundreds of crazy guns and gear to unlock that boost Walter’s stats – not to mention, make him look pretty. You and three friends can team up to exterminate a zillion robots while progressing through tons of missions, facing uncomfortably epic bosses, and leveling up along the way.” –Xbox.com Description

The Story
The game stars P. Walter Tugnut, a lovable hillbilly who’s been stock-piling his RV with guns, ammo, and beer awaiting the robot apocalypse. In case you’re wondering, the “P” stands for “Pickles” – but don’t call him that.

4 Player Online Co-op
You and three friends can take on the robot armies together, but you’re also fighting each other in what we call “co-opetition”. You need to work together to defeat the hordes of robots, but you’re also competing for the best performance, since at the end of every mission each player is awarded nuts based on how many robots they killed.

Guns & Gear
Equipping items (like a tutu) affect Walter’s attributes, and some even give him special abilities. Using nuts dropped from dead robots, you can buy bigger guns and better gear – of which there are hundreds to unlock!

Level Up
Killing robots gives you XP, XP makes you stronger, and the stronger you are, the more robots you can kill. It’s all one big cycle of robot murder.