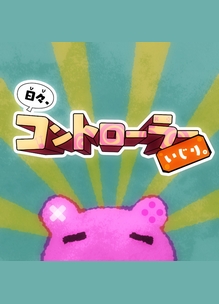 Shake That Controller! (日々、コントローラーいじり。or Hibi, Controller Ijiri!) was likely delisted from the PlayStation 4 in Japan between January 5th and January 7th, 2020. The game was featured in a “Year End Sale” that ran through January 4th in Asian territories. The last date that PS Deals.net shows a price for the game was January 6th.

The game launched in December of 2018 as a free, limited time download for PlayStation Plus members before being released for-pay in July of 2019. It was never translated or released outside of Asian territories. As a digital exclusive it is now considered Extinct.

“Start from the “ROOM” – All sorts of mechanisms are hidden in the “ROOM.” Players can enjoy an assortment of actions by throwing the items obtained through mini-games at various places, rubbing or hitting the character “Kami” with the DualShock 4 controller’s touchpad, and messing around with the controller.

Six Mini-Games Planned for Release – When the game launches, only the mini-game “Ponpon Popcorn” will be playable. A total of six mini-games will be available via update(s) due out after launch. In each mini-game, events occur simultaneously in the world of the “INSIDE”—where character “Tami” enters a “Mysterious Box” and plays the mini-game—and the real world space of the “OUTSIDE,” where “Kami” and “Tami” live. Various events will occur in the world of the INSIDE as the whimsical Kami moves around the Mysterious Box.

Mini-Game #1: Pop-Pop Popcorn – A mini-game where you control Tami and ride the popcorn popping out of the pan to collect the stars in the sky. Collected stars are turned into coins, and you will receive even more coins by getting rare stars or combos. Since you might make a mistake when the pan slips up, you will be in a danger of falling when Kami shakes the Mysterious Box, but this can also be used as a chance to jump higher to reach normally unreachable stars.“