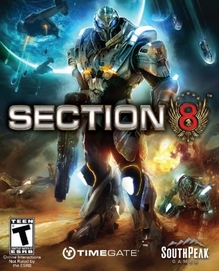 In 2009, developer TimeGate Studios attempted to sue publisher SouthPeak Games over the production of Section 8. After a series of appeals that lasted into 2013, the ruling finally fell in favor of SouthPeak resulting in TimeGate filing for bankruptcy and the studio’s closure in May of 2013. Just months later SouthPeak Games itself quietly ceased operations in July of 2013.

Forum discussion among players allege that the game’s multiplayer features were shut down as early as 2012 on Xbox 360 and early in 2013 on Steam. TimeGate published Section 8 itself on PlayStation 3 outside of North American territories and, though the studio is gone, the title remains available as of September 2019.

“Section 8 is a large-scale, sci-fi first person shooter where fast-paced action meets military strategy in the far reaches of the galaxy. Join the epic battle between the 8th Armored Infantry and the Arm of Orion by taking part in fierce squad-based combat across majestic alien worlds.

Choose the experience you want to play by customizing your own equipment loadouts, and dynamically manipulate the flow of combat with on-demand vehicle requisitions, strategic asset deliveries, Dynamic Combat Missions, and the ability to drop anywhere on the battlefield from 15,000 feet above. On a completely player-driven and dynamic battlefield, no two games of Section 8 will ever play the same.“

Thanks to StormShadowEqD for submitting this game to the site