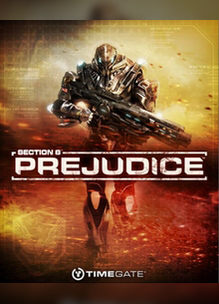 Section 8: Prejudice was likely delisted from PlayStation 3, exclusively in North America, no later than the end of 2013.

In 2009, developer TimeGate Studios attempted to sue publisher SouthPeak Games over the production of the original Section 8. After a series of appeals that lasted into 2013, the ruling finally fell in favor of SouthPeak resulting in TimeGate filing for bankruptcy and the studio’s closure in May of 2013. Just months later SouthPeak Games itself quietly ceased operations in July of 2013.

The original Section 8 was then delisted from Steam, PlayStation 3 in North America, and from Xbox 360 worldwide by the end of 2013. Section 8: Prejudice remained available on Steam until it was delisted on September 2nd, 2020, likely due to an expired publishing agreement between TimeGate and Atari. Section 8: Prejudice remains available on Xbox 360 worldwide (published by Microsoft Studios), PlayStation 3 in Europe and Australia (published by TimeGate Studios) and on PC through the Humble Store as of April 2022.

On the battlefield, prejudice takes many forms, knows no boundaries, and drives all conflict. In the distant future, humanity will call on its most fearless defenders to confront an emerging threat determined to eradicate human life as we know it. Section 8®: PrejudiceTM is a sci-fi first person shooter with dynamic combat, where every decision drastically impacts the battlefield.