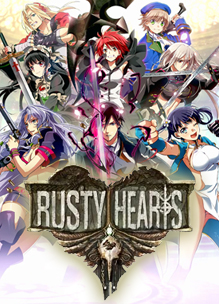 Rusty Hearts was initially shut down in Japan on March 27th, 2014. Perfect World then announced on July 29th, 2014 that their English language release would be shut down on September 15th of the same year. Perfect World’s announcement follows:

After three wonderful years, Rusty Hearts is officially coming to an end on September 15, 2014. We would like to thank all the fans who helped bring life to all the characters in Rusty Hearts. Your loyalty, dedication, and countless hours crawling through dungeons is what made it all possible. Perfecting combos, endless Christmas in Bramunez, and the constant beatdowns — all just to climb the ladder to greatness — these built a lifetime of memories. Rusty Hearts was a unique experience and will be cherished forever.

Starting today, Rusty Hearts will no longer be downloadable and players won’t be able to deposit ZEN. Existing players will still be able to play, both through Arc and directly through the launcher, until September 15th.

Players who’ve been active within the past 30 days will have their past 6 months’ worth of Zen purchased or transferred into Rusty Hearts credited  into their Wallet. (This will take some time, but we’ll let everyone know via email when it’s ready) All Zen credited into the Wallet can be transferred into other games on Arc.

If you enjoyed Rusty Hearts, we think you’d enjoy some of our other games, and we want to give you a head-start in them. We’ll be emailing out codes for Neverwinter, Swordsman and PWI. These will be sent out by email, so please make sure your email addresses are up to date. Join our discussion in the forums as we say our final farewell to Rusty Hearts, and once again, we thank you humbly for three amazing years.

The Chinese version of the game remained active until Xunlei Games confirmed that the game would close in that region on January 12, 2015. The original Korean version was not confirmed to be defunct until January 4, 2016.

Private servers and fan projects began nearly as soon as the game was shut down. Seemingly the most thorough of these is Rusty Hearts: Revolution which offers “all the features and options available in the final client”. The server entered open beta on February 8, 2020.

In this gothic inspired world of vampires, half-vampires, and humans, players will be able to unleash devastating combo attacks, engage in a wide variety of epic monster battles, collect valuable loot, and become a unique hero.