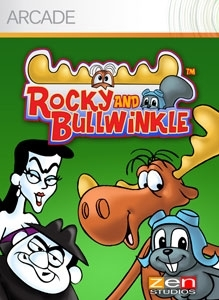 Rocky & Bullwinkle was delisted on Xbox 360 on September 25th, 2014 according to a post made by TrueAchievements.com. The delisting was most likely due to expired licensing between Zen Studios and Universal Studios, the current owners of the IP. Zen Studios later licensed the property for a Rocky & Bullwinkle table in Pinball FX but it has also been delisted.

“Rocky & Bullwinkle™ offers a fast, fun collection of over 100 micro-games, starring your favorite characters from the classic cartoon series: Rocky and Bullwinkle, Boris and Natasha, Dudley Do-Right, and many more. Xbox LIVE® Vision owners can control 25 of the games using gestures, a surefire way to liven up any gathering. Filled to the brim with zany humor and hilarious antics, this is one title you don’t want to “moose” out on!“

Great characters: Based on one of the most popular cartoon series of all time, the game features Rocky, Bullwinkle, Boris, Natasha, and a host of other memorable characters from the classic TV show.

Fun, fast action: Over 100 fast-paced micro-games are packed with zany, family-friendly humor layered with an extra level of humor for the adults. The fast action and quick games create an easy pick-up-and-play experience for gamers of all ages.

Hotseat multiplayer: Up to twelve players can compete locally in hotseat mode.