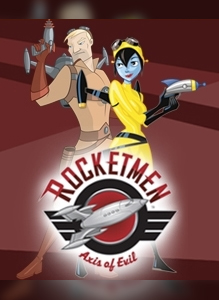 Rocketmen: Axis of Evil was likely delisted from Xbox 360 and PlayStation 3 in late 2014. February 12th, 2014 is the last date that the game was confirmed to be available on Xbox 360 but a slew of delistings were confirmed in December of 2014 including others from Capcom. It would be easy for a small release like Rocketmen to go unnoticed alongside Marvel vs. Capcom: Origins at the time.

Despite the timeframe, Rocketmen: Axis of Evil was presumably delisted due to an expiring license of the Rocketmen property to Capcom, or the low sales of the game and its expansion “It Came From Uranus”. Interestingly, the game would be considered Extinct if not for its inclusion in the 2012 retail release of the Capcom Digital Collection.

Join Rocketmen Nick Sion, Alec Mink and the Alliance of Free Planets in their white-knuckled struggle to free the solar system from the tyrannical grip of the Legion of Terra in this RPG styled shooter. Players have the choice to save the galaxy alone or cooperatively with up to three other players over Xbox LIVE or locally on the same console. With its distinctive cel-shaded art style, engaging storyline, customizable characters and RPG elements, this shooter will keep players coming back for more.