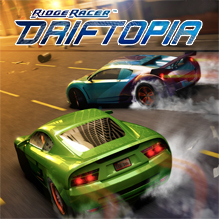 Bandai Namco announced through in-game messages and on the official Ridge Racer Fan Facebook page on June 19th, 2014 that Ridge Racer Driftopia would be terminated on August 15th, 2014. After nearly a year in Early Access on Steam and a slightly shorter free-to-play period exclusively on PlayStation 3 in Europe, response to the game and its playerbase was likely deemed not positive enough to continue supporting the game.

“We thank all the players who joined the Open Beta for their participation, support and dedication. Your feedbacks will be invested in our existing and upcoming projects to deliver you thrilling and exiting experiences.”
– June 19th Facebook post

A subsequent Facebook post was made on August 12th, 2014, just days before the game was to be shut down, reiterating the team’s appreciation.

“RIDGE RACER™ Driftopia is the first ever free-2-play game based on the legendary franchise, and puts the series’ signature drifting and arcade handling right at the heart of the experience. Developed by Finland’s Bugbear Entertainment, the studio behind 2012 title Ridge Racer Unbounded, RIDGE RACER™ Driftopia distils the experience to the essential elements of driving, drifting and destruction, with upgraded visuals that make every dust mote and gleaming fender shimmer with life. Players will be challenged to shave seconds off each other’s times as they tear up the streets and punch holes in solid concrete to reveal vital shortcuts. Beat other players’ times to climb the global rankings, level up cars and earn booster cards to get that racing edge over the competition. IDGE RACER Driftopia is coming to PlayStation®3 and PC in 2013.”
– Official press release

Thanks to  Alex for submitting this information to the site.