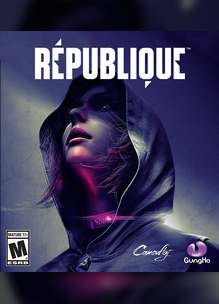 Republique was delisted from PlayStation 4 sometime between January and August of 2018. In August, publishing rights to the Steam version of the game changed hands from GungHo to Camouflaj, the game’s developer. It is likely that the PlayStation 4 version was delisted no later than than August, although discussion on PSNProfiles forums suggests it was removed “a few months back”.

Camouflaj has not publicly addressed the delisting but it would appear to be related to the end of a publishing agreement with GungHo.

You receive a call from Hope, a woman trapped inside a mysterious totalitarian state. Hacking into an elaborate surveillance network, you guide Hope through a web of danger and deception across five thrilling episodes.

Developed over five years by industry veterans (Metal Gear Solid 4, Halo 4, Middle-earth: Shadow of Mordor, F.E.A.R., SOCOM), Republique is a thrilling and topical adventure that explores the perils of government surveillance in the internet age.

Immersive puzzles and strategic choices
Innovative, interactive developer commentary – eavesdrop on conversations recorded during the making of the game

Thanks to Critter2003 for submitting this game to the site