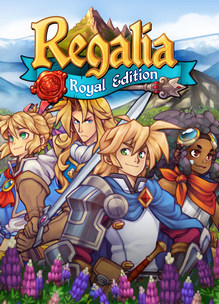 Regalia: Of Men and Monarchs – Royal Edition was likely relisted on Nintendo Switch (EU, NA) and Xbox One (AU, EU, NA) between late August and late September of 2020. The Nintendo Switch version appears to have received a patch by September 30th and may have been relisted the same day. As the publisher and developer credits are unchanged, the relisting seems to be related to the update, perhaps improving bugs and stability issues that plagued the console versions at release. Expected to return once it cleared Sony’s lengthy certification process, the PlayStation 4 version was finally relisted on or near March 5th, 2021 in all territories.

Regalia: Of Men and Monarchs – Royal Edition was delisted from Nintendo Switch, PlayStation 4, and Xbox One in June of 2020. Google Cache archives (Xbox.com – Nintendo.com) show it was still available in late May and early June. We were informed on June 16th that the PlayStation 4 version had recently been removed.

The delisting appears to be specific to the console editions of the game that were independently handled by Crunching Koalas. Neither they nor developer Pixelated Milk have publicly addressed the game’s removal but performance issues and missing content have plagued these versions since they were released.

Crunching Koalas provided an update on the console versions on April 16th, 2018 promising that fixes would be released “ASAP”. However, replies on Twitter through December of 2019 indicate that problems still remained, especially with the Nintendo Switch version. It is assumed that the game was delisted due to these lingering, unresolved technical issues.

“Regalia draws inspiration from JRPG classics, but also delivers a modern mix of good old adventuring and dynamic storytelling. It’s a tactical RPG, but it’s actually a game about the restoration of your kingdom, bonding with vibrant characters met during your journey, embarking on the most peculiar quests possible, and bringing back your best jRPG moments in an up-to-date, accessible style.

It can also be a game about unforgettable, rewarding combat and well-thoughtout tactics, but that’s for the player to decide — there’s always a possibility to tone down the difficulty level or even skip a battle if someone can’t wait to see what other plot twists lay before him.

Omitting the battles won’t make all the problems go away, though — there’s always something to be done in Ascalia, like dealing with teammates’ quirks. Take Theo, for example, a vampire with a blood aversion, whose biggest dream is to become a hairdresser; or Esther’s ambition to make a DIY atomic bomb with just a few gears and spare parts. Oh, and there’s always a fishing mini-game!“

Thanks to Bob Wocky for submitting this game to the site