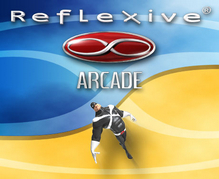 Reflexive.com (aka Reflexive Arcade) was among the earliest and largest online casual game distribution services. Launching around 2003, the site grew to offer over 1,000 individual titles and in 2006 debuted a custom recommendation engine based on user ratings. An affiliate program allowed individuals to earn a cut of sales that they directed to the site through customized URLs. Along with many of their own internally developed titles, the Reflexive.com offered games from over 200 studios including PopCap Games, Youda Games, IWin, GoBit Games, GamesCafe, and more.

“A premier casual games portal, Reflexive Arcade distributes more than 450 downloadable PC games from nearly 200 developers to a rapidly growing audience that downloads millions of games each week. Casual games is the fastest growing segment for downloadable games with demographics targeting women over the age of 35. Reflexive Arcade adds up to five (5) new casual and independent games each week created by developers from around the world.” – 2006 Press Release

On October 22nd, 2008 Reflexive CEO Lars Brubaker announced that Reflexive Entertainment had been acquired by Amazon. Although he promised that Reflexive’s publishing and affiliate programs would be available “now and in the future”, a message sent to Game Center Solutions users in March of 2010 confirmed that these offerings would soon be going away. GameZebo provided the following summary of that direct communique:

‘You will continue to have access to the Control Center until July 31, 2010 at which time we will distribute your final royalty report to the email address we have on file and our agreement with you governing the Game Center Solution Affiliate Program will terminate,’ Brubaker continued.

‘We wish you all the best and hope that we will have more opportunities to work together in the future.'”

An Amazon spokesperson confirmed to Gamezebo in the same article that Reflexive Entertainment would be focusing entirely on game development after June 30th and that games would no longer be available to buy from Reflexive.com. According to Wikipedia, as of 2014 Reflexive had been merged with Amazon Game Studios, which was founded in 2012 to develop exclusive titles utilizing Amazon’s proprietary technologies. In June of 2019 Amazon confirmed that the studio was undergoing a reorganization and eliminating dozens of developer jobs.

Below is a chronological list of titles developed and published by Reflexive Entertainment that were available through Reflexive.com. Many remain available from Amazon as of this writing.