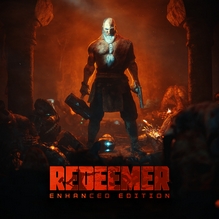 Redeemer: Enhanced Edition returned to PlayStation 4 in Australia, Europe, and North America on July 19th, 2019. The game also debuted on Nintendo Switch and Xbox One on the same date. On all platforms and in all territories the game is now credited as being published by Ravenscourt “a division of Koch Media”, as well as its original publisher Buka Entertainment.

No explanation has been given for the game’s disappearance or return but the inclusion of Koch Media on all releases suggests that Buka Entertainment needed some kind of publishing assistance to get the game relisted, and released on new platforms.

Redeemer: Enhanced Edition was delisted from the PlayStation 4 on or very close to its release date of October 30th, 2018. Although it was announced for release on PlayStation 4, Nintendo Switch, Xbox One and Windows PC, the PlayStation 4 version appears to be the only one that was publicly available to buy, however briefly.

The only proof of its release on PlayStation 4 are a handful of Trophies that were earned on October 30th. The North American PlayStation Blog included the game in their weekly roundup of new content for October 30th but no link was provided to the game’s store page. It appears that the game was never  mentioned by Nintendo and Microsoft press outlets like MajorNelson.com or Nintendo’s ‘What’s New’ feed.

Friend of the site, FallenRyan, received a Twitter reply from the studio on January 14th, 2019 confirming that the game would return to sale (at least on PlayStation 4) by “End of Q1 2019”.

“Redeemer: Enhanced Edition is an explosive top-down action shooter in which you fight your way through hordes of opponents in a variety of different ways. Whether by sneaking, punching, or sabotaging, your creativity is given free rein when deciding how to obliterate your opponents.

You are Vasily, an elite agent who previously worked for the largest cybernetics weapons manufacturer in the world. At some point, the company turned against him, and it was only with a great deal of luck that he was able to escape to a remote monastery deep in the mountains. For 20 years, he sought to find peace and harmony with the monks, but now the company has found him and given him the opportunity to settle old debts.

Whether it is fists, hammers, or firearms, in Vasily’s hands they’re bad news for his opponents. Play alone or in local co-op mode by turning your living room into an arena.“