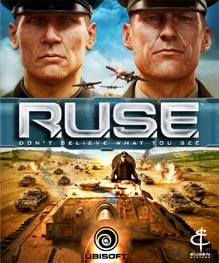 R.U.S.E. was delisted from Steam on December 9th, 2015. It was likely delisted on PlayStation 3 around this same time. Although comments from Ubisoft explain that the game was removed due to expired licensing of “military items” featured in the game, the Xbox 360 version alone has remained available to download.

“Due to the expiration of licensing rights over certain military items within the game, R.U.S.E is no longer available for purchase. This does not, in anyway, affect players who already have the game in their library.”
– Ubisoft comment, PCGamesN

It is unknown if this content was originally included or was able to be patched out of the Xbox 360 version. It is also possible that the terms of licensing on the Xbox Marketplace somehow exempted the game from being removed.

“Developed by Eugen Systems, creators of the critically acclaimed strategy title Act of War: Direct Action™, R.U.S.E™ is a one-of-a-kind RTS game that allows players to deceive and manipulate their enemies to lead their nation to victory, controlling the action from the heart of the battlefield to the full theater of war.“

Become a master of deception

Fight a war of perception using recon units & your spy network to gather intelligence on your enemy and then strike his Achilles heel!

From captain to the chief in command, live an epic campaign full of manipulation, jealousy & betrayal!

Experience War as a Strategist

Fight on immense & incredibly detailed maps, the biggest in an RTS: a perfect playground for strategy!

Test your strategic skills with fast-paced, addictive cooperative & adversarial skirmishes, up to 8 players

Thanks to Z for submitting this game to the site