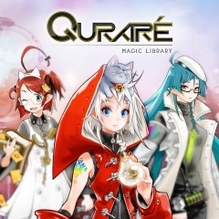 On April 28th, 2017, Global GM “Chimie” posted to the game’s official Facebook group to announce that QURARE: Magic Library on PlayStation 4 would be shutting down on August 31st, 2017. The full post follows:

Greetings Librarians,
It has been a long time since we have been able to give any information or updates about Qurare PS4 and we would like to extend our deepest apologies for the lack of communication these past weeks.

When we launched Qurare for PS4 it was our intention to provide our players with regular updates and exciting content for all users to enjoy. While our dedicated users and fans helped shape a great close-knit community around the game, we were unable to reach a sustainable level for Qurare PS4.

As such, we were not able to give it the attention that the game and our players deserve. This has regrettably left Qurare PS4 stagnant and we have not been able to progress with the game as we would have liked.

– Gems, Gold, and Clover may be used as normal but New Gem purchases will not be available.

-Thank You Event: In-game prices of items/packs/etc will be greatly discounted. (50~80% off all items)

We thank you for every moment you’ve spent playing with us.

and the rest of the Qurare PS4 team.

Although Sony doesn’t offer an official “early access” program on PlayStation 4, QURARE was initially offered up as such. Sony Europe’s PlayStation Blog recapped some announcements from E3 2016 including the following quote from Lee DongHoon, CEO, Smilegate Megaport, Inc:

“The first Card Battle RPG to be released on PlayStation®4! You can enjoy numerous dazzling card illustrations and have exciting adventures across many dimensions with charming librarians.

The Library of Babel held all known information in the world. One day, it exploded for reasons unknown and the Kodices stored in the library were scattered throughout the dimensions. Today, three librarians are working together at the Qurare Magic Library to rebuild the Library of Babel.“

Stunning Card Illustrations
You can see more than 1,000 top quality card illustrations from Korea and Japan. Beautiful cards will be kept updated with the live service of the Korean mobile game.

Unique Stories and Settings
Players will find themselves immersed in the vast sea of stories that span multiple dimensions. Also, new content for you to explore will be added every month!

Enjoy Multiplayer RPG
All the exquisite Kodices in QURARE have unique skills. Use Kodices with skills that best fit each role in a team, and play multiplayer battles online with your friends!