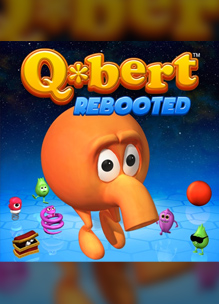 Q*bert: Rebooted was delisted on Steam on September 14th, 2018. Sideline Amusements published the game on Steam directly while all other versions of the game were handled by LOOT Entertainment and are still available as of this writing. It would seem that Sideline Amusements is no longer an active publisher on Steam or possibly chose to remove the title from sale given its long-standing performance issues.

Q*bert is Back @!#[email protected]! One of the most critically acclaimed and commercially successful arcade games of the 1980s is back in its Classic pixel perfect 2D form, and a re-imagined Reboot version with state of the art 3D game-play and graphics that remain faithful to the original concept. Both versions are exciting twitch games requiring keen puzzle solving skills and logic.

First introduced in 1982 by Gottlieb, Q*bert was critically-acclaimed and went on to become the third most successful arcade game of all time (behind Pac-Man and Donkey Kong). It inspired home versions, a variety of Q*bert merchandise, numerous copycat games and even an animated TV series.

Q*bert Classic stays true to the original in all its jagged 2D pixel art glory, now optimized for the modern PC with mouse and Steam gamepad controls. As the title character, players jump around an isometric cube pyramid and convert each block’s color while avoiding familiar adversaries Coily, Ugg, Slick, Sam, Wrong Way and Red Ball. Levels become progressively harder with more enemies blocking your path and the tiles requiring multiple jumps to change to the required color.

Thanks to Lee Tursi for submitting this game to the site