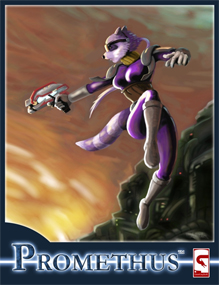 The Promethus demo was removed from the PlayStation Store for PlayStation Portable between December 2009 and early 2010 after the dissolution of developer GeeKay Soft in January.

Touted as an “old school platformer” in the style of Super Metroid, Promethus was to feature an open map layout with access gated by special abilities acquired through exploration and combat. It was revealed to be in development in mid-to-late 2009 and the demo claimed it would be released “later this year (in 2009)”.

“Discover what lies on the planet Promethus, a forgotten world that harbors a dark ancient secret that the universe has long forgotten,” reads the teaser text at the end of the demo.

“You are the renowned space mercenary Angel. Your mission is to infiltrate the seemingly peaceful planet of Promethus and uncover the plot of the Evil Lord Duroth. Recover and use the energy blaster, katana, grenades and whip to vanquish the enemies. Uncover ancient promethan relics and crystals to powerup your attacks. Little does she realize the depth of the deception, and the perilous adventure that will decide the fate of the known galaxy that awaits her on the planet Promethus.”