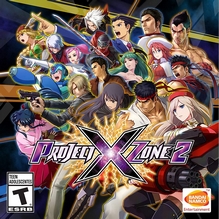 Project X Zone 2 was delisted from the Nintendo 3DS eShop in Japan on June 30th, 2017. It was likely delisted in other territories shortly afterwards. One June 21st, 2017 GoNintendo reported the advanced notice of the Japanese delisting. Like its predecessor, Project X Zone 2 appears to have been delisted due to expired licensing between the major parties involved: Bandai NAMCO, Capcom, Sega, and for the first time in series history, Nintendo. The game remains available on physical media.

“WORLDS ARE CROSSING ONCE AGAIN! In the sequel to the original world crossing adventure, legendary characters from Japan’s most prolific video game publishers come together to create the biggest mashup strategy game ever! Developed by MONOLITH SOFTWARE INC., Project X Zone 2 gives gamers the opportunity to play as their favorite characters from a multitude of franchises and form teams of characters hailing from classic and current franchises and engage enemies through strategic turn-based battles.