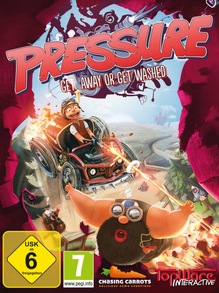 Pressure was ultimately delisted from Steam on June 20th, 2017. Before that, the game was briefly removed from sale between January 13th and February 9th, 2016. Developers are usually reserved when it comes to delistings but in this case Chasing Carrots laid out the reasons the game was initially removed in a series of posts on the game’s Steam page. In the pinned Steam Community forum post they stated:

We started developing Pressure back in 2011 and after a while of searching for a publisher (since we also wanted to release the game on Xbox 360 and PlayStation 3) we decided to go with Topware. A decision we had to regret, eventually.

At first, this seemed like a good deal. We had already financed the full game and they threw in a big marketing campaign and their longtime knowledge in the industry. Huge promises were made, but few were kept. Press coverage was pretty insignificant, the initial release was very rough and Pressure stayed mostly under the radar. So, basically there was no launch effect regarding sales.

Even worse: The console versions never saw the light of day, which is another story. We couldn’t help but to face the bad situation, and after a painful time of uncertainty and false promises, we contacted a lawyer. By the mid of 2015 we had settled with Topware in court for a ridiculous deal. With the start of 2016 we got all the rights for Pressure back, though, which was our main concern.

In the end we made absolutely no money on developing Pressure. However, thanks to the commitment and trust of our investor, we’re still alive and continue to bring delicious game creations to you, the players.

We hope, this sheds some light on the situation. If you have any questions about Pressure, please contact us. We’re happy to stay in touch.

Thank you for your continued support, you’re awesome.

In a separate announcement on the game’s Steam page the team announced plans to move ahead with Pressure Overdrive, an expanded and updated version of the game, offering existing players a “huge discount” on the upgrade.

as some of you may have noticed, the game was unavailable on the Steam Store for some time. Mainly this is due to the change of the publishing rights, which we got back over some court hearings and a final settlement with our previous publisher.

With the start of 2016 everything was moved over to our account and we had to make some changes to the game and the store page. Now Pressure is back on the store with a new price point and we’re able to communicate better with you.

So what about the future of Pressure? Well, of course we gathered a lot of great feedback during the time this game was on the store and this feedback was so extensive that we decided to develop an overhauled and improved version: “Pressure Overdrive”.

We’re planning to make this version available for you later this year for PC, Mac, Linux and maybe even for the latest consoles! More details on that will follow in time. All owners of the original game will get a huge discount on “Pressure Overdrive”, because you are awesome!

The game’s final delisting in June of 2017 was likely to reduce confusion over the different versions of the game once Pressure Overdrive was released.

“The game offers a mix of shooting and top-down racing in a colorful Steampunk setting.

Players take control of a buggy that runs on steam power to speed through the tremendous levels of “Pressure’s” vibrant, cartoonish world. The sinister Earl of Wellness is attempting to expand his exploitative empire of wellness spas, and must be stopped. The classic top-down view gives players full vantage of the race track, enemies, giant bosses, and vile tire-busting traps.

The hero awakes to find the usually cool waters lake where he takes his morning bath completely dry and filled with cruel machines. The sinister Earl has drained the lake to be the site of his new Wellness Spa Temple. Thwarting his sinister plans and returning the valuable water to the citizens of the world is the main objective of the game… as well as destroying his countless, caltrop-laying minions.

A sophisticated shop and upgrade system allows players to upgrade their buggy in between races.“