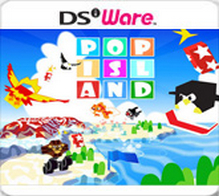 “Discover a joyful universe where playing is always a pleasure with Pop Island for your Nintendo DSi system! Colorful and fun, Pop Island is an all-action capture the flag game where you pick which team to compete on before running, jumping and spinning your way around the island in an attempt to collect the priceless flags hidden throughout it. Become a surfing penguin, a flying fish or a waterskiing crocodile as you go all out for victory—unlocking 12 more joyful animals as you rack up points across eight different planets. You might even end up competing as a skateboarding mammoth!

Playing alone is plenty of fun, but the madcap action reaches a new level when your friends get involved. By sharing the demo of the game via DS Download Play, up to seven more people can join you for some head-to-head or cooperative action. With plenty of power-ups, you’ll need to concentrate on capturing more than just the rival team’s flag to claim victory!“