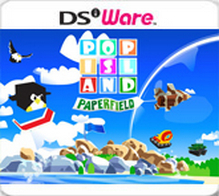 FUN IS DECLARED!
Thanks to the easy pick-up and play control themes, dive into this fresh universe and have fun in almost no time! Join your team and race, surf or fly on three new islands. Get a maximum of flags to win the victory in the “Race for flags” or “Capture the flag” mode.

FURIOUS MACHINE
With the new “Magic Shooters” team, take control of eight land, sea and air vehicles or animals, including tanks, hovercrafts, planes, surfing penguins, eagles, black cats! Get even more involved in the action with the impressive graphics engine that runs fast and smooth at 60 frames per second.

1-8 PLAYERS
In Solo Mode, rack up points and unlock new playable vehicles and maps. Thanks to the DS Download Play feature (available on ALL Nintendo DS and Nintendo DSi) , share Pop Island – Paperfield and compete joyfully with up to seven friends!

PLUS
If you own Pop Island on your Nintendo DSi , you can get three new maps and four vehicles including the helicopter and the submarine!