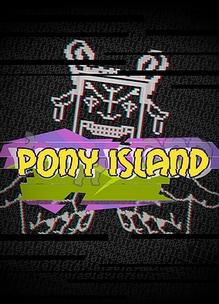 Pony Island was delisted from GOG.com between October and December of 2016. In late September developer Daniel Mullins was publicly questioning his publishing partnership with Plug In Digital who brought the game to the GOG.com platform.

@plugindigitall Hoping to chat re: BulkyPix + how my game is on GOG collecting revenue I don’t receive.
– Daniel Mullins, September 20, 2016

By December 12th the game had been removed from GOG.com and at least one forum thread was started questioning the disappearance. In May of 2017 Mullins was asked if the game would return to GOG.com to which he succinctly replied “Probably not! My apologies”. The game was likely delisted due to a breakdown of the relationship between Mullins and Plug In Digital/BulkyPix.

“Pony Island is a suspense puzzle game in disguise. You are in limbo, trapped in a malevolent and malfunctioning arcade machine devised by the devil himself. The devil detests having his puzzles solved and poor programming exposed; you will need to think outside the box to proceed and you will be insulted when you do.“

In Pony Island you will…

Thanks to @BowzasaurusRex for submitting this game to the site