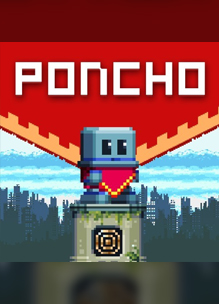 Delve Interactive had expressed disdain with publisher Rising Star Games in 2017 and this could be related to the delisting. However, it seems more likely that the publishing arrangements simply ended for the console releases of PONCHO and neither party sought to renew them. The Steam version of PONCHO is also published by Rising Star Games but remains available as of February 2021.

A PlayStation Vita port of the game was in the works but Delve’s Dan Hayes confirmed in a Gamasutra postmortem that development had been scrapped on this version of PONCHO.

“A robot, a poncho and a journey of discovery! Make your way through this wonderful world of pixelated parallax platforming to solve the ultimate puzzle: who is Poncho?

The world is ruined; humanity has disappeared and all that remains are robots, trying to find a new purpose in existence. But for Poncho, the adventure is just beginning! Explore an open world full of colourful characters, leaping between parallax layers to overcome obstacles and solve puzzles. Can you make it to the Red Tower, meet your Maker and ultimately save humanity?“