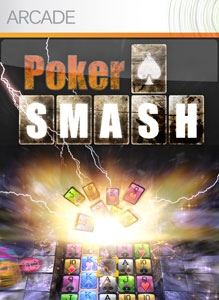 Poker Smash was delisted on Xbox 360 (and Xbox One backward compatibility) on June 12th, 2017. The game was added to Xbox One backward compatibility in March of 2017 but by June a message was delivered to players who bought the game or made an in-game purchase explaining that it was being removed. As compensation, those players were issued refunds and sent a download code for a free copy of Hexic 2.

“Poker Smash is no longer available in the Xbox One Backward Compatibility program and so is no longer playable on Xbox One. It can still be enjoyed on Xbox 360, where your achievements and game progress will carry over.”

The last active capture of the game’s Xbox.com page was on June 12th, 2017 but at that time only the free trial was available. The last confirmed capture where the game was available to buy was over a year earlier on February 26th, 2016. Poker Smash was later released on iOS and BlackBerry devices where it is also unavailable to play.

Outside of this messaging, Microsoft has not addressed the game’s removal. The developer, Void Star Creations, has been inactive for quite a few years (since 2014, after successfully getting the game Greenlit on Steam) so it seems unlikely the removal was tied to the studio shutting down.