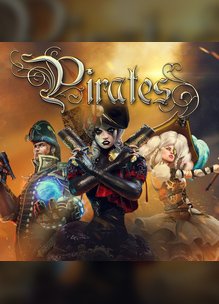 Pirates: Treasure Hunters was removed from Steam on September 1st, 2016 and was likely removed from PlayStation 4 on or shortly before this date. The game’s servers appear to have gone offline in August according to speculation on the PSNProfiles forums.

The Spanish developer, Virtual Toys, ceased operation in June of 2016 but by July the majority of the staff had reunited as the subsidiary, Saber Interactive Spain S.L.. As a result of these changes, combined with the game’s tepid response, Pirates may have been abandoned as other Virtual Toys releases remain available to download as of this writing.

Choose from a broad range of Hunters, each one equipped with unique weapons and skills. Take them to battle and face the opposing team in exciting online matches up to 6vs6 players. Use cooperative vehicles to destroy your opponents and claim victory. Show that you are up to the challenge. Will you be able to prevail on the battlefields of Pirates: Treasure Hunters?