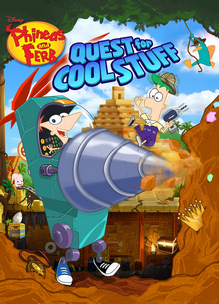 Phineas and Ferb: Quest for Cool Stuff was likely delisted on Nintendo 3DS, Wii U, and Xbox 360 between 2016 and the end of 2017. Majesco ceased operations as a video game publisher in December of 2016, a move which likely resulted in many of their digital titles being pulled from sale shortly thereafter. Though it is not solid confirmation, the game’s official homepage at QuestForCoolStuff.com went offline between October and November of 2017.

The game remains available on physical media and was also released in limited capacity to retail across Europe.

Join Phineas and Ferb on an out-of-this-world adventure as they dig, drill, and explore for hidden treasure for their Museum of Cool in their newest ride, the A.T.T. (All Terrain Transformatron). Play as Agent P and stop Dr. Doofenshmirtz from releasing his horde of robots on the Tri-State area.