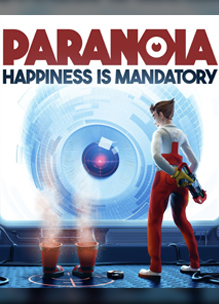 Paranoia: Happiness is Mandatory was delisted from the Epic Games Store in late January or early February of 2020. Unaddressed by both developer Black Shamrock and publisher Nacon at the time, it was discovered in April of 2022 that the game’s removal was caused by a DMCA claim from Paranoia creators in a dispute with Nacon.

The TechRaptor article describes in much greater detail but in short, Nacon released a version of the game which the developers felt was unshippable. After Nacon refused to pull it from sale themselves the creators filed a DMCA claim which Epic complied with, pulling Paranoia from their storefront. Nacon then filed a legal claim against Black Shamrock and Black Shamrock filed a counter-claim against Nacon, sealing the two into non-disclosure arrangements until the documents were made public in April of 2022.

Paranoia: Happiness is Mandatory continues to be listed on Steam as “Coming Soon”. Although retail release dates exist for the PlayStation 4 and Xbox One releases, it does not appear they were ever shipped. However, a few copies of the game on disc for PC appear to have shipped across Europe.

Stay alert! Trust no one!

Traitors are everywhere, plotting to destroy The Computer, Alpha Complex itself, and our precious way of life. Identify them, report them – or eliminate them as the treasonous scum they are. Keep your laser handy!

You lead a team of Troubleshooters with RED security clearance. Your job is to find trouble – and shoot it. Friend Computer monitors your every move, alert for any sign of treason, and will undoubtedly reward you for prompt and heroic action in defence of Alpha Complex – or punish treasonable acts, possibly by assigning you to be used as reactor shielding.